From Polos to Birkenstocks to Custom Starter Jackets, the Boston Celtics Forward Shares His Style Evolution

Standard basketball shorts didn’t cut it for Jaylen Brown. He hated the length and extra fabric. So much so that in fourth grade Brown would roll up the legs above his knees. It was an easy solve until his shorts would unfold as he sprinted up and down the court. By eighth grade, Brown ditched them altogether, playing exclusively in shorts that stopped mid-thigh.

Then the jokes came.

Get some longer pants, Kyle Lowry told him.

In high school, while working out in his hometown of Atlanta, Brown crossed paths with NBA players at a local gym who’d rag on him. But Brown didn’t care about the haters. He took his short-shorts style to the league, and by the time he landed in Boston for his rookie season with the Celtics, the trend that got him laughed at was back in vogue.

Fashion, as they say, is cyclical.

“It’s not a statement. It’s just me being comfortable,” Brown tells B/R Mag. “People took notice ’cause I’m doing it in the NBA now, but I did it in college, and I did it in high school. Some people give me credit for the trend, but I don’t want credit. I’m just being myself.”

This mirrors Brown’s motto on game days, when he’s walking down the corridor of an arena tunnel, rocking everything from Givenchy shirts to Saint Laurent jackets. “I would go to games like I go to dinner. If I come and wear something crazy, I’m just trying to be myself,” Brown says. “I really like black. I love wearing black, different aesthetics and shades. I like earth tones. Those are my go-tos.”

His style influences come from a range of sources, evident as he watches the Steve Jobs biopic, starring Michael Fassbender, in his Newton, Massachusetts, home in early September. Brown admires the late Apple co-creator’s minimalist look. “[Jobs] is one of my biggest inspirations,” Brown says. “I like his fashion, that mock black turtleneck and jeans.”

As the movie continues to play, the 21-year-old calls for his Google Home to play the Spotify UK house music playlist. The home assistant speaker is just the latest addition to his apartment, part of his desire to expand his purview into technology, among other spaces. He wants to learn five new languages by the time he turns 25. He owns a piano, takes weekly lessons and is learning the piano riff for "Still D.R.E." by Dr. Dre. Brown wants to be more than an athlete. Brown is also learning how to play the guitar.

“You've got a rapper in Dame Lillard, you've got people in politics, Harrison Barnes is moving into that. You've got [Russell] Westbrook who's now a fashion designer,” Brown says. “It's become more acceptable, but still, the average basketball player, if you were to make a comment about Donald Trump, they'll be like: 'Shut up. You're just a basketball player.' I hate that. I want to help change that notion.”

Brown says his perspective was shaped once he left the 404 to attend college in the Bay area. Growing up in ATL, Brown followed local trends: Polos, Ralph Lauren, Ed Hardy and Jordans. “You had that stuff to be cool,” Brown says. “In Atlanta, it’s a competition. Whoever has the best dress, the best car, the best this, the best that.” His style changed during his freshman year at the University of California. He traded his Jordans for Birkenstocks and stopped wearing earrings.

“At Berkeley, you wore a hoodie and pajamas and Birkenstocks, and that’s swag,” Brown says. “I was so thrown off. What I thought was cool wasn’t cool no more, so I thought about what I actually liked. I started experimenting. I started wearing Birkenstocks. I wanted to dive into the culture.”

His fashion was evolving as he gravitated toward more jackets and sneakers. The jacket collection now ranges from custom pieces from Starter, celebrating his homes in Atlanta and Boston, to bomber jackets, which he prefers rocking in earth tones.

He developed a visor collection too, to accommodate his flattop, a hairstyle he’s rocked for four years. 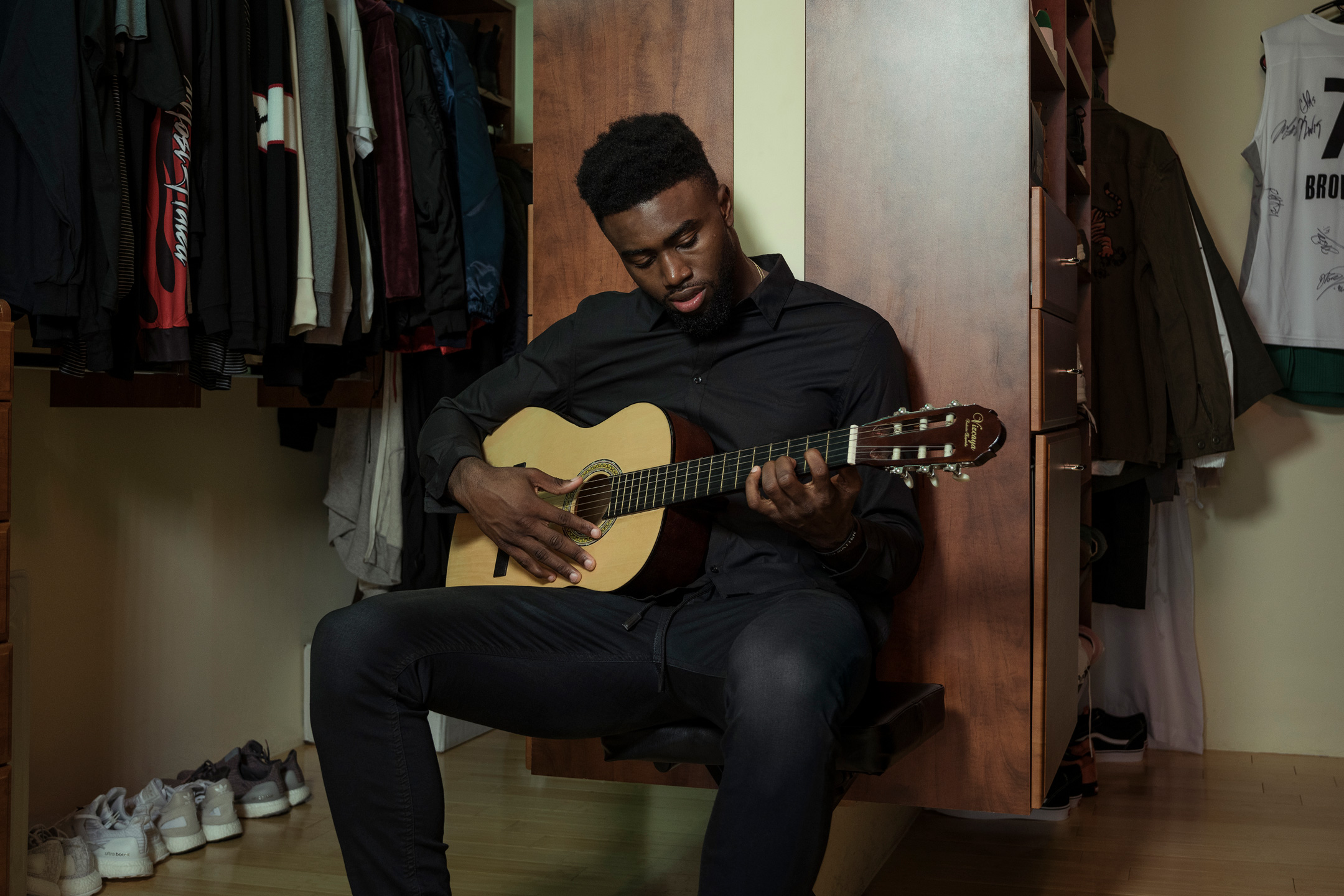 “I’ve always had tall hair,” Brown says. “The visor game is something I thought would be dope to get back into style.”

Brown’s move to Boston added another dimension to his style, as he was introduced to the city’s blustery cold season.

“I’ve added winter swag,” Brown says. “Big jackets, comfortable jacket, peacoats, etc. I never needed it before. When I got to Boston, it was fun because I got to experiment because of that.”

He also sports a wide range of Adidas sneakers, from the entire Yeezy line to Pharrell’s Human Races. Brown owns more than 100 pairs of kicks, including Gucci, Alexander McQueen and Balenciaga sneakers. Brown says most of them collect dust, with only 10 to 15 pairs in his regular rotation in his second NBA season, in which he’s scoring 15.1 points per game and grabbing 6.8 boards while shooting 43.7 percent from the field. He loves wearing everything from the latest hot drop to Flower Mountain, a sneaker brand only available in Europe.

“I can’t tell you how I get them 'cause then everyone will be hitting me up,” Brown says.

Since turning pro, Brown has elicited the help of four stylists, who routinely send him looks they think could work for him. He still likes shopping for himself, though. Last season, Brown, Avery Bradley and Terry Rozier frequently shopped together at malls and boutiques in Boston.

“It gets harder for some guys to just go out and go shopping because of their names,” Brown says. “I’m still at the level where I can go places and shop and not be bombarded.”

Which helps him focus on developing his sense of style. 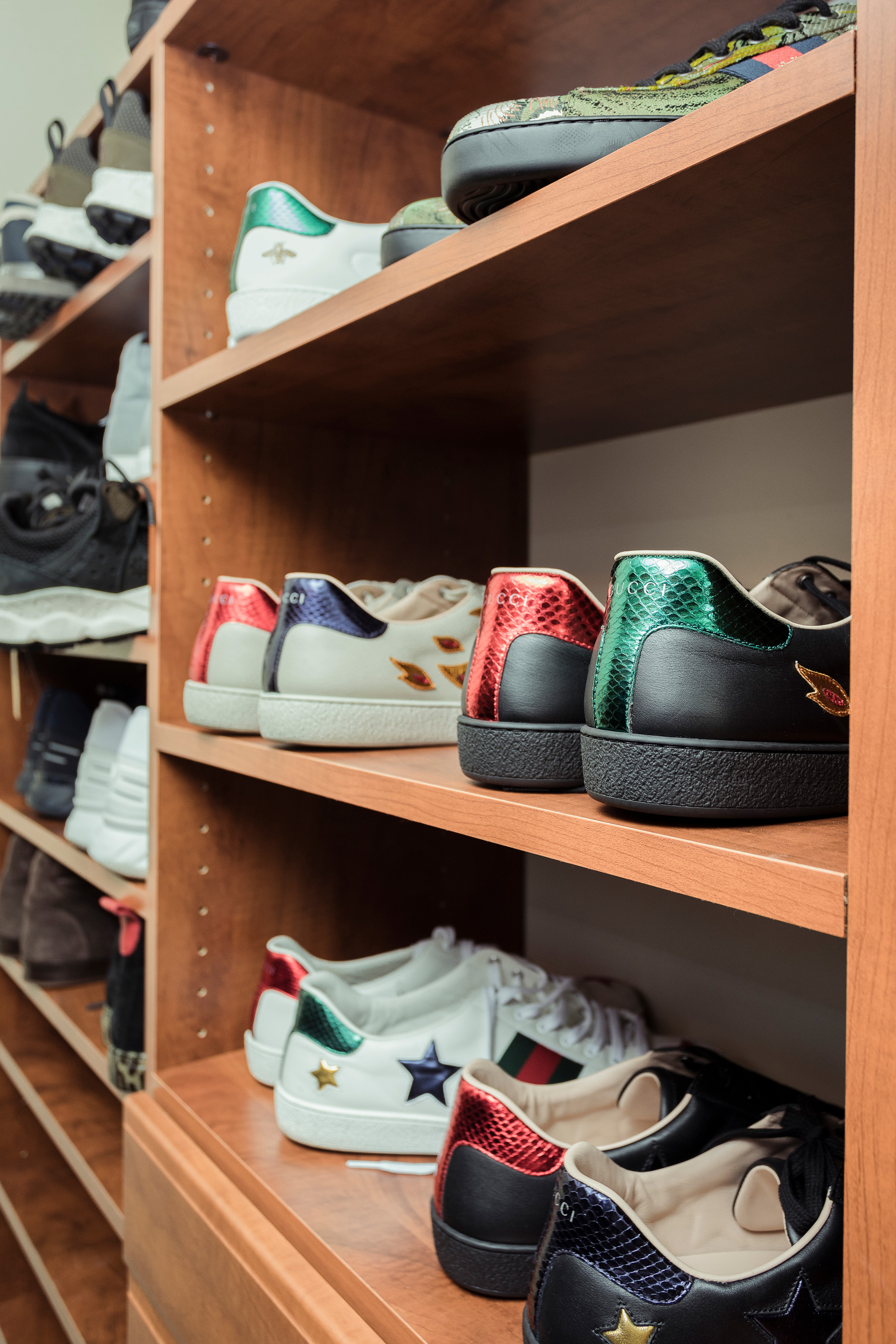 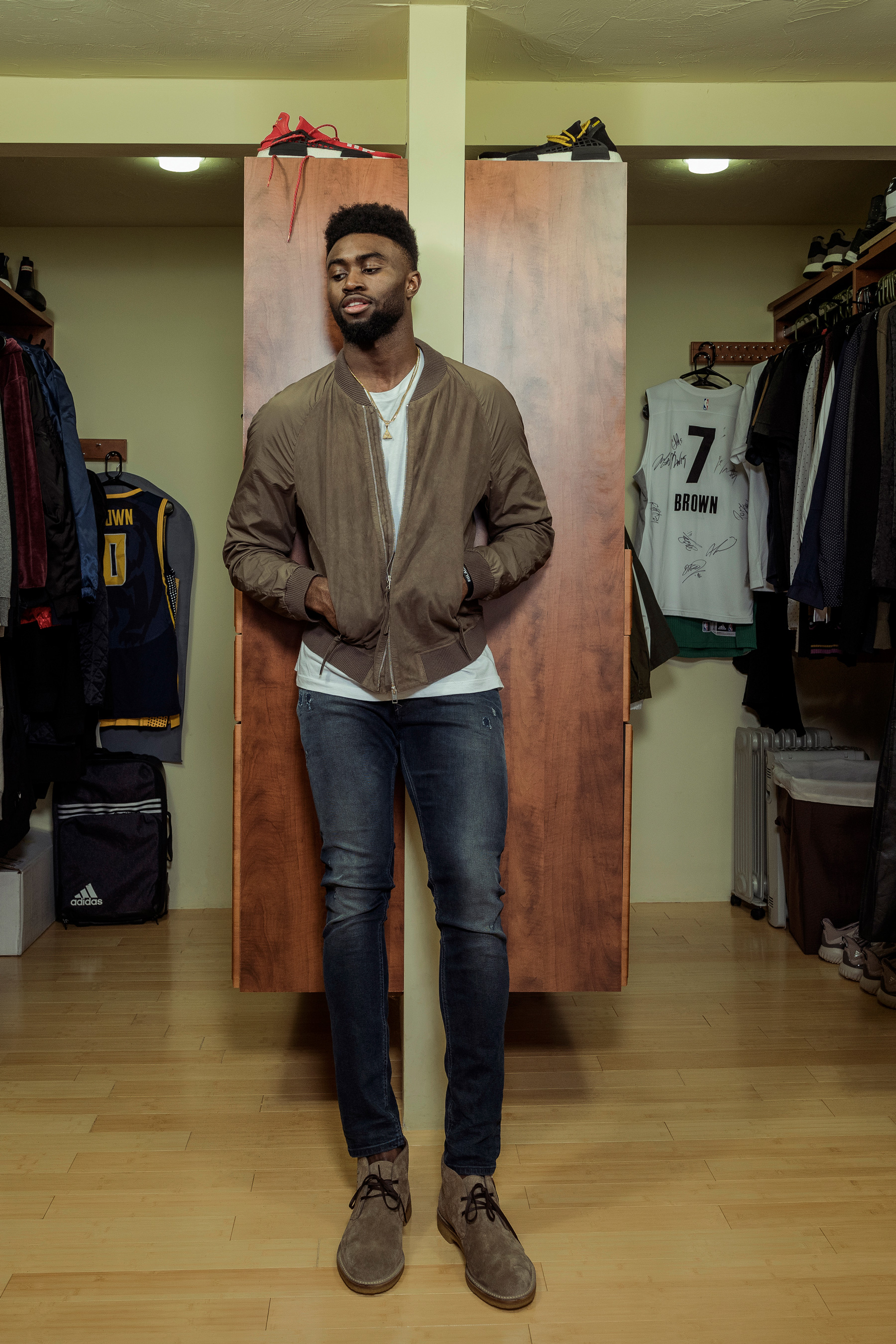 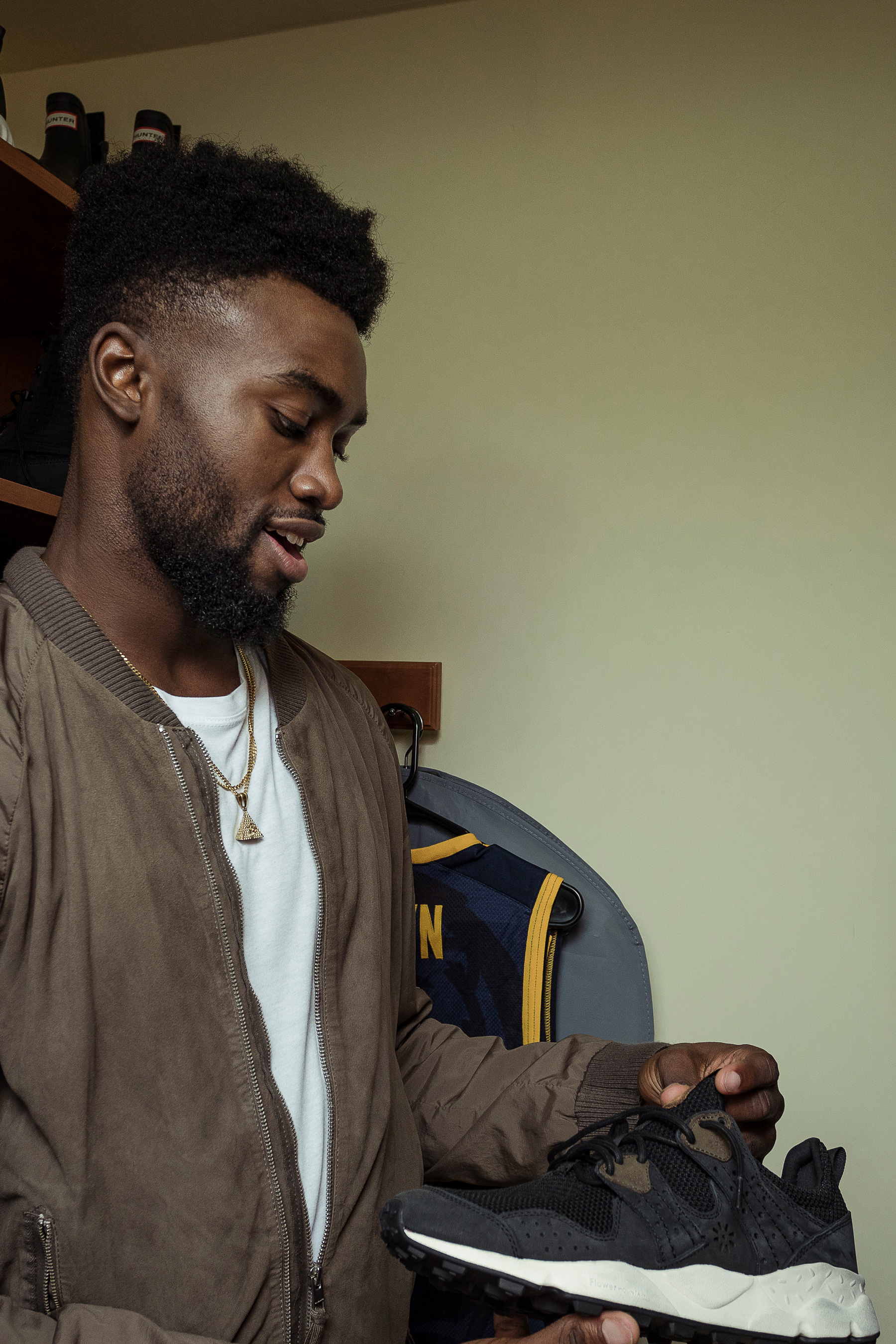 “I can’t sum up my fashion because it’s still changing,” Brown says. “How I dress is probably going to be completely different from five years from now. People will come at me telling me to wear this or wear that. If I don't like it, I don't like it. They couldn't pay me to wear it. If it's something I can rock with, I'll rock it. I'm more interested in being completely authentic to me. In my opinion, being myself is making a statement.”

That explains why Brown looks up to Kanye West as a role model. While Ye has made a name for himself as a rapper, Brown appreciates how Kanye has diversified his profile, branching into clothing and accessories. 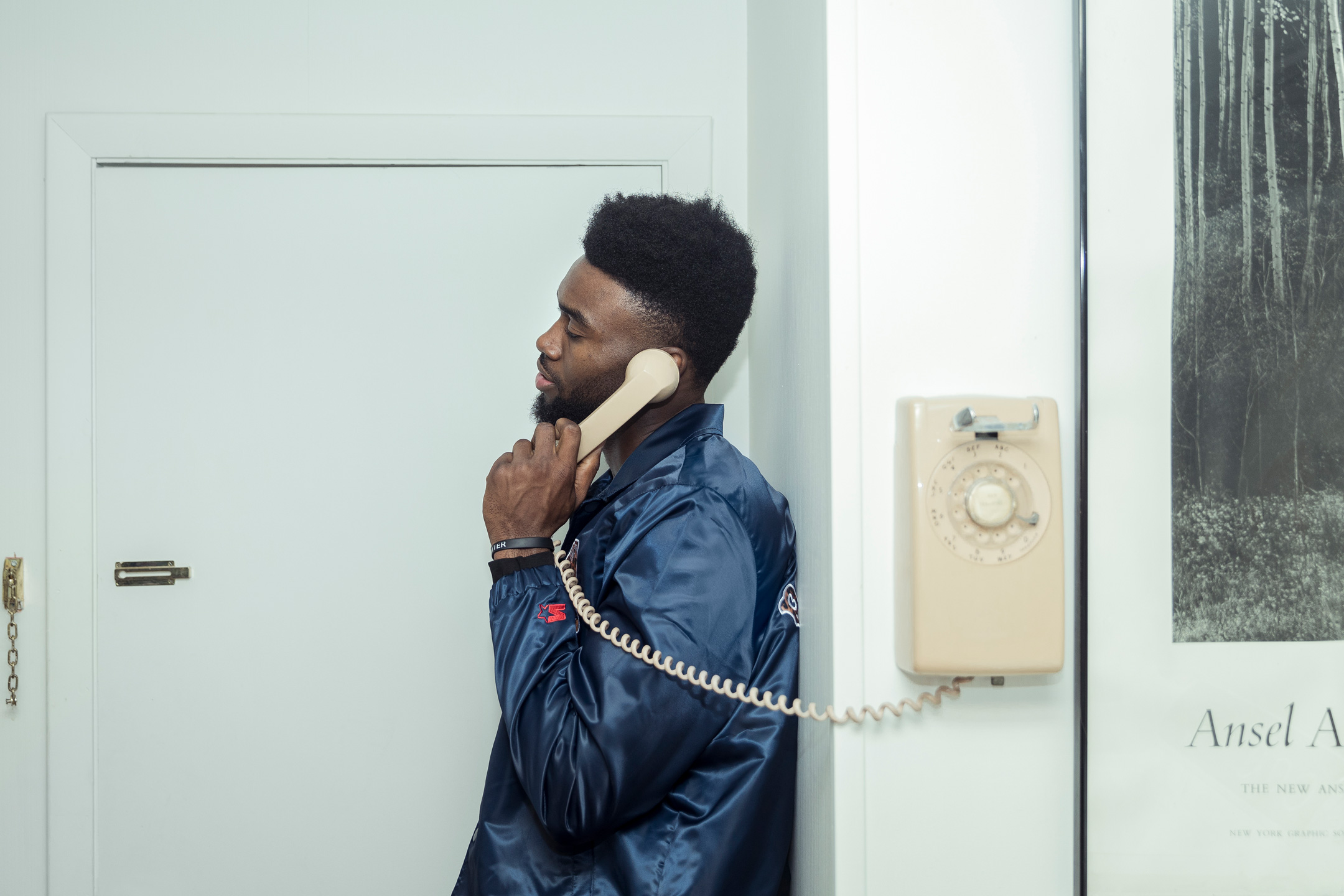 “Now, [Kanye] is respectable in the fashion sphere and has his foot in the door,” Brown says. “The shoes he has coming out, the 700s, they look like dad shoes. It's making shoes that where I'm from, people would laugh at, but now if you look at them, they're Yeezys and he's making them cool. If that's his mindset, that's dope.”

Brown is taking notes from Ye in hopes of making an impact beyond the court.

Joon Lee is a staff writer for Bleacher Report and B/R Mag.