The all-smiles face of the Jazz went from rookie to megastar, just like this. Introducing the B/R POWER 50—a celebration of 2018's most influential people in sports culture.

Art by I LOVE DUST

This year, Donovan Mitchell has been learning to live with mobs. In New York for the NBA draft in June, he stopped at a Champs Sports to shake some hands and sign some shoes. After the event, he expected to sneak out a side exit but instead was confronted with a cascading wave of fans rushing in for unsanctioned signatures. As they pointed their phones at him, he in turn focused his phone's camera on them. Arms flung forward to pat his shoulders, and feet ran after his SUV as it sputtered away in Times Square traffic. Through it all, Mitchell just smiled.

That's not how most people would react to a mob, but for Mitchell this kind of attention is still a pleasant surprise. He wasn't the No. 1 pick in the draft; he barely broke into the lottery. And he didn't win Rookie of the Year—even if he did some damage to the NBA's definition of the word "rookie." But he still had the glow-up of all glow-ups when so few expected him to. In his first pro season, Mitchell cozied up to the kings of the league, helped a recently spurned fanbase learn to love again and even added a word to the dictionary.

Not long ago, none of this seemed possible—not this season anyway. Less than 10 years ago, he was just a Connecticut middle schooler watching LeBron James make "The Decision" in person. A few years after that, he was a cocky two-sport star who thought his future was in the infield instead of the backcourt. Fast-forward a couple of years, and he was a sophomore at Louisville, heartbroken about a recent NCAA tournament loss and convinced he would return to school for his junior season. Instead, he decided to test the NBA draft waters. But what started as a submerged toe ended up as one of the biggest cannonball splashes in the league last season.

Mitchell tested the draft waters after his sophomore year at Louisville, snuck into the lottery and surprised everyone. (Photograph by Michael Conroy / AP)

To preserve his NCAA eligibility, he paid his own way to a CAA predraft training camp. His mother and his sister and the agents there all advised him to stay in the draft, but he didn't believe he would until a few stars showed up. "When you're growing up, all you hear is, 'Stay away from agents, stay away from agents,'" Mitchell told B/R in December. "So I wasn't trying to hear that. I didn't really listen to them. But then Paul [George] and Chris [Paul] told me I could be pretty good. And I thought, 'Maybe.' Then they started breaking the game down, and the way I played, and that gives you a different sense of confidence. Like yeah, 'I'm ready for this.'"

The Jazz originally brought him to Salt Lake City for a courtesy workout—an opportunity for him to shake loose the jitters with a team that wouldn't select him. He blew them away, and as he sat in the back of the car on the way to the airport, he texted his mother a picture of the mountains. He told her he loved Salt Lake City. A month later he was ecstatic as he watched the Jazz trade up to No. 13 to take him.

When a team communications officer texted him the news that Gordon Hayward would be signing with the Celtics in free agency, Mitchell remained upbeat. And his attitude was contagious to the crowds who watched him play in the NBA Summer League and started anointing him an "MVP" before his first regular-season start. "How fans warmed to me, that really opened my eyes," he said. "I didn't know how passionate they were. I had no idea. On the night of the draft, my [Twitter] followers skyrocketed. The reception I got was overwhelming. Guys were playing to get contracts, but they were chanting my name."

Check out more groundbreakers on the B/R POWER 50

Explore the B/R POWER 50, a list of the most influential
people in sports culture right now.

Having won over the hearts of fans, Mitchell turned his attention to the players he was a fan of growing up. He'd already stunted on fellow rookies like Jayson Tatum with his on-court moves. But with veterans like Chris Paul and Paul George, he was deferential. Whereas some rookies try to prove they belong by going right at veterans, Mitchell approached them politely after games, greeting the players he knew and asking for advice from the ones he didn't. "I always think about what I can work on," he said. "Anytime someone said I was doing well, I was like, 'What am I doing wrong?' That stuck with me."

As late as the middle of December 2017, Mitchell was still relatively anonymous. When he and I met for lunch at a crowded restaurant in Salt Lake City, we were uninterrupted for more than an hour. But a week later, LeBron crowned Mitchell a "young king" in an Instagram comment. A week after that, the mobs began forming, like at the Fashion Place mall for a signing. By the time the All-Star break came along, he was showing off custom-designed Louis Vuitton Supremes and channeling his inner Vince Carter to win the NBA Slam Dunk Contest. (Before the event, his NBA 2K dunk rating had been an unfathomable 50. It's now 97.) 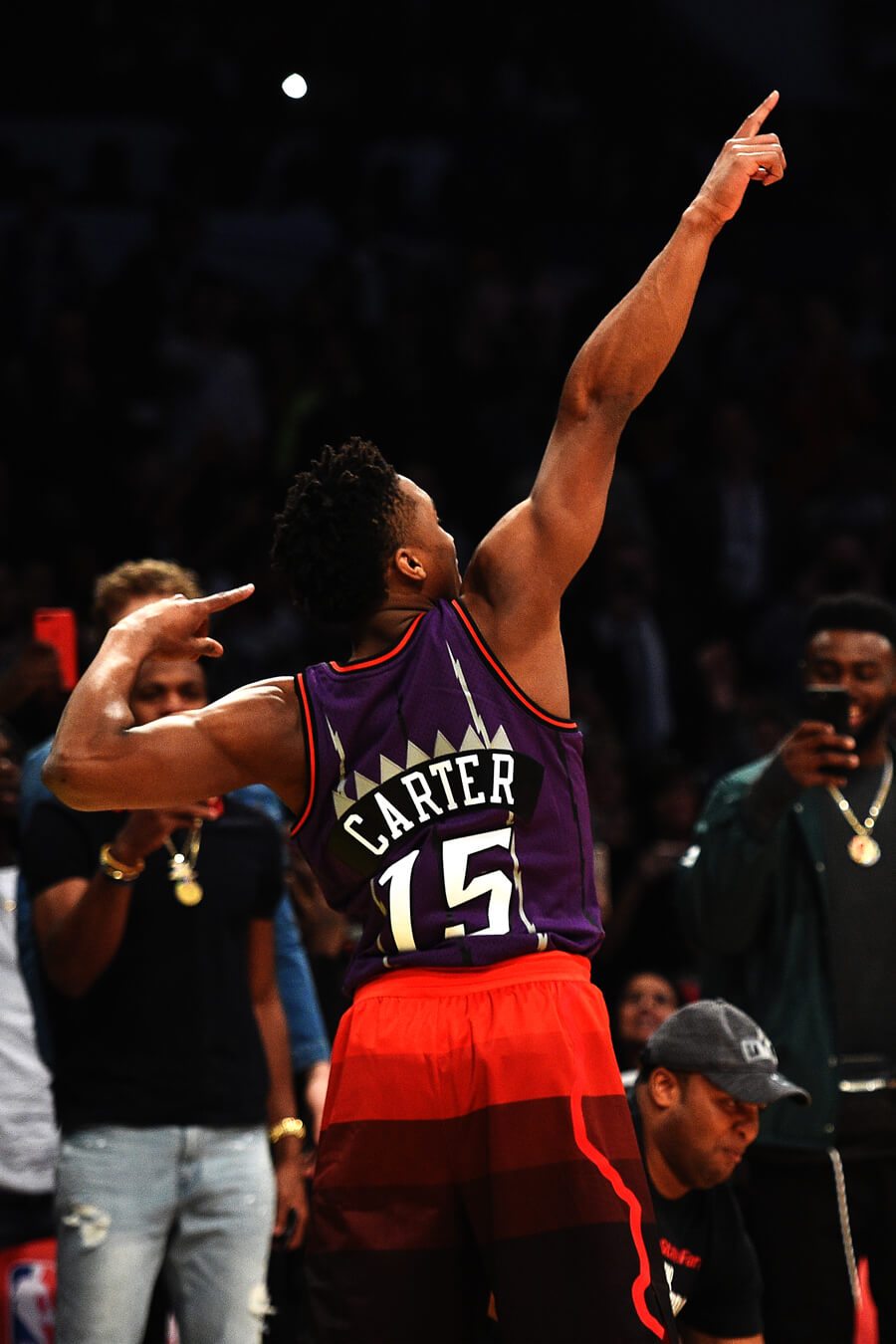 In December, hardly anyone noticed Mitchell at a reference. By February, he was reviving Vince Carter's magic at the dunk contest. (Photograph by Kevork Djansezian / Getty Images

As the regular season came to a close, Adidas helped him poke fun at the Rookie of the Year race with clothing that questioned front-runner Ben Simmons' standing for the award. (Simmons was technically a second-year player.) He solidified his status as a Utah hero by leading the Jazz past Oklahoma City's Big Three of Russell Westbrook, Paul George and Carmelo Anthony in the first round of the playoffs. And he gave everything he could against the Rockets—outscoring the entire Houston roster in his final full rookie quarter—before ultimately being sent home.

This offseason, he's hopscotched from Spain to Los Angeles and met adoring crowds at every stop along the way. But he's remembered to stay true to the hometown fans as well, splashing into a Fourth of July cookout in Salt Lake City.

Even with all the attention, he has kept the humble attitude that made him so beloved. In early July, Mitchell made a surprise appearance in Salt Lake City for the Utah Jazz 3-on-3 Tournament. Hundreds of local players participate in the tournament, but on the sidelines Mitchell quickly became the main attraction. Before leaving, he stopped to say hello to several of the kids in attendance. "I just wanted to come by," he told reporters. "I saw that it was here, and I thought it was pretty cool. If I was a kid, I would die if my hero came to this. I kind of wanted to be able to do that."

He wanted to do something good, and he did it. The only question for NBA fans now is: What does Donovan Mitchell want to do next?

EXPLORE THE B/R POWER 50, A LIST OF THE MOST INFLUENTIAL PEOPLE IN SPORTS CULTURE RIGHT NOW 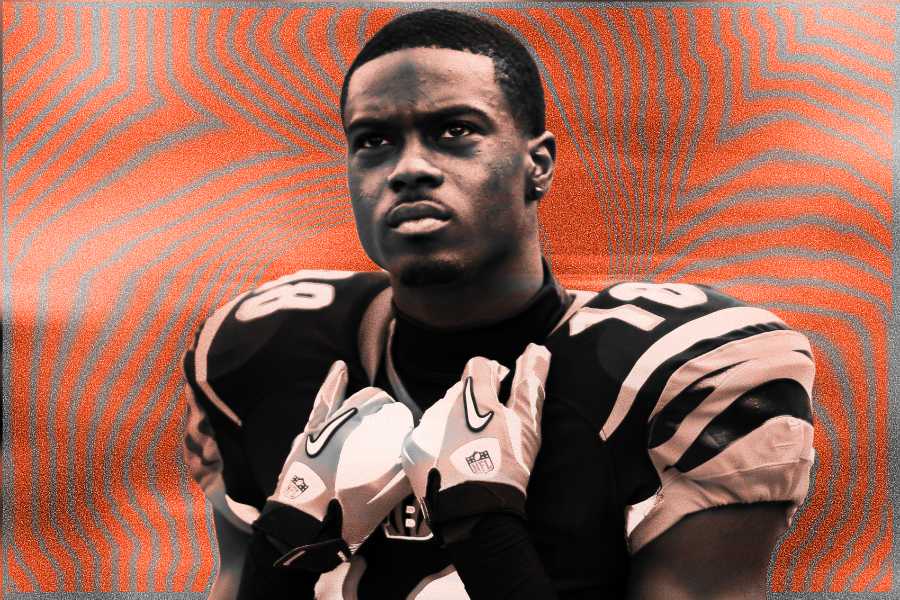 Is A.J. Green a 'Guaranteed' Hall of Famer? 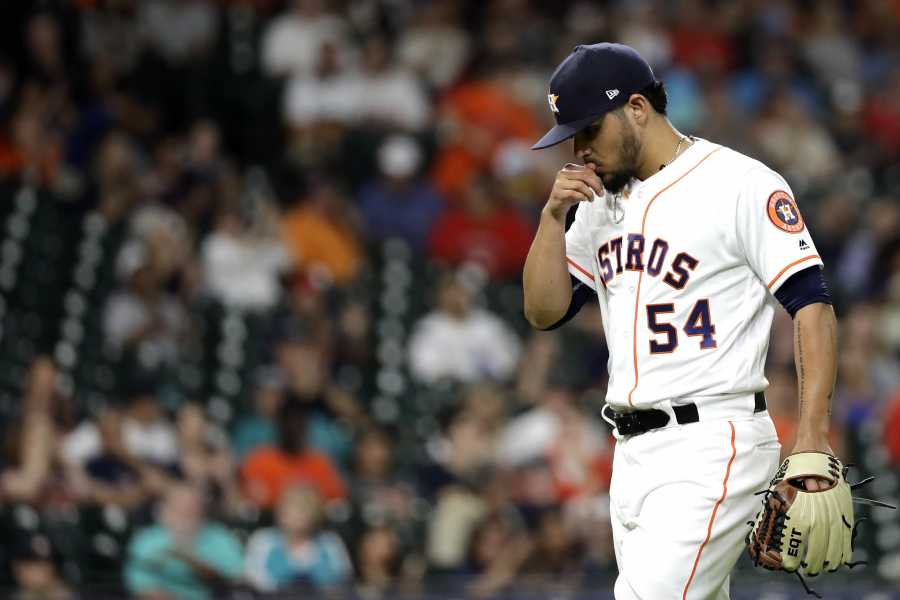 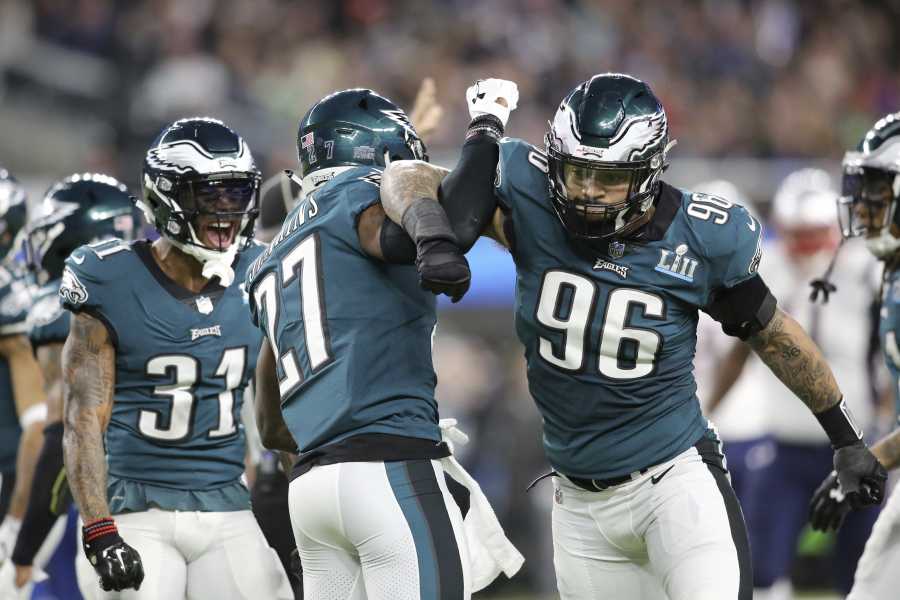 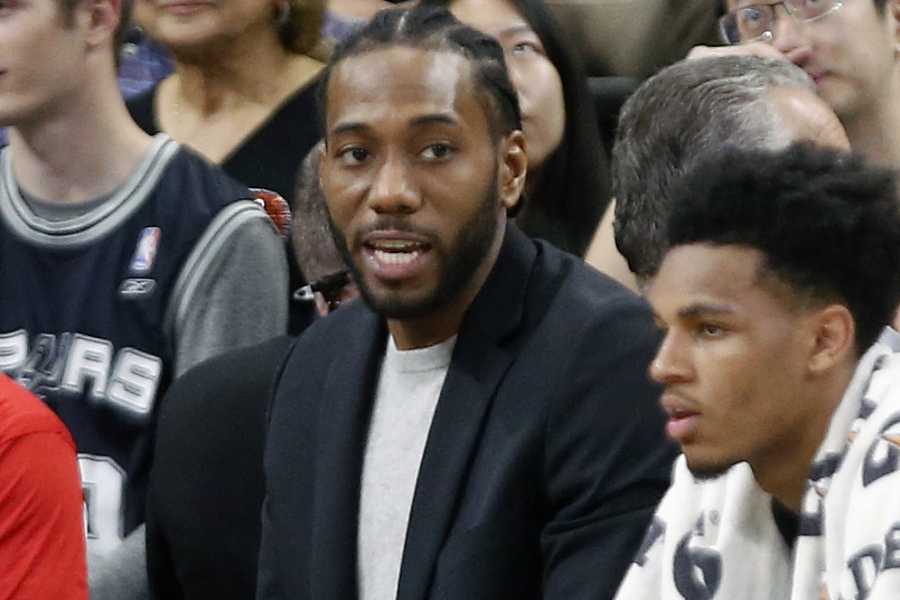 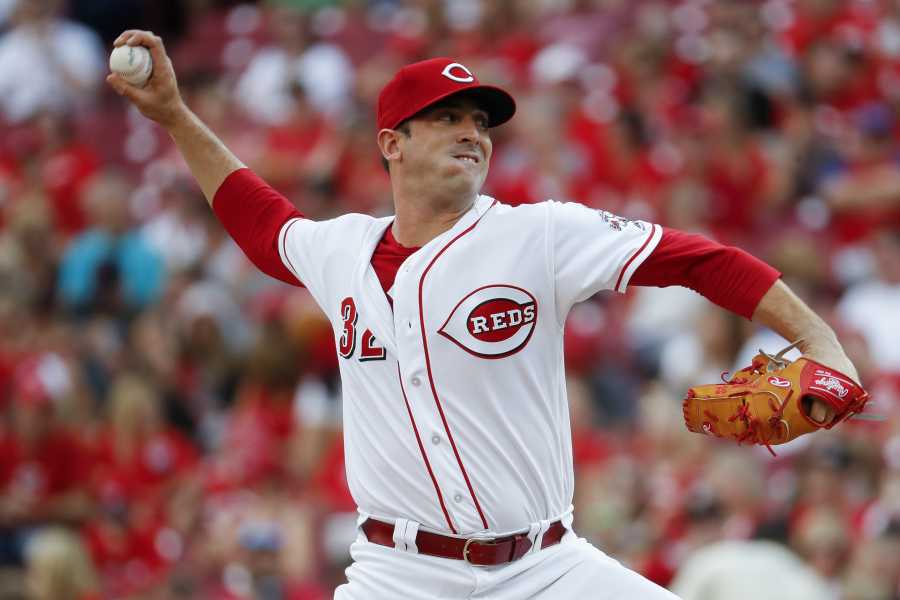 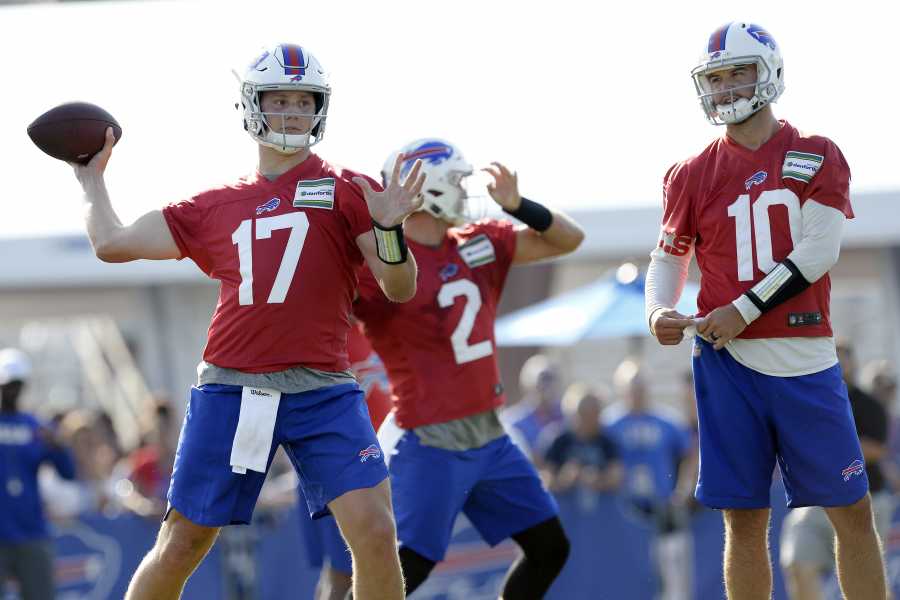